1968 – Pantelis K. Donoupoglou , established in Athens (46, Athinon Avenue) in the exact location that is found today our branch office of Athens. Soon after is relocated in the region of Piraeus, where are our headquarters since.

1978 – Beginning of collaboration with firm INJOHNSON for the import of oil-seals in the Greek market.

1980 – Beginning of collaboration with the Italian firm ΒENERI for the import of retaining rings.

1995 –  Becomes  Koyo national distributor for the sale of industrial and automotive bearings in Greece.

1998 – Exclussive collaboration with firm Lian Yu Oil Seals  for the distribution of LYO oil-seals in the Greek market.

2009 – Purchase of majoritarian capital stock of the company “ Bearings Trading Center s.a.”.   B.T.C operates since as our subsidiary company in Athens. and P. K. Donoupoglou S.A. functions as an SKF Authorized Distributor. 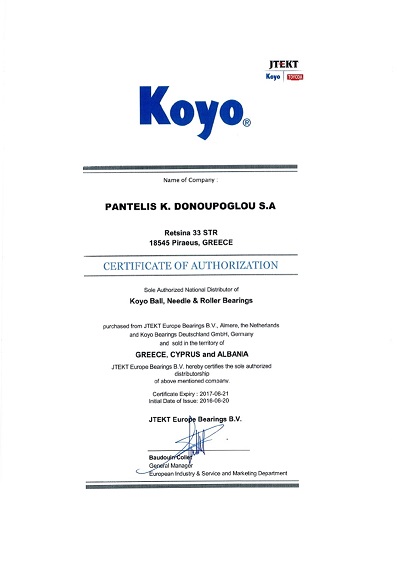 One of the largest distributors of power transmission products in Greece, Pantelis K. Donoupoglou S.A. with its flexible sales and logistic organization serves effectively both industrial and automotive aftermarket customers.