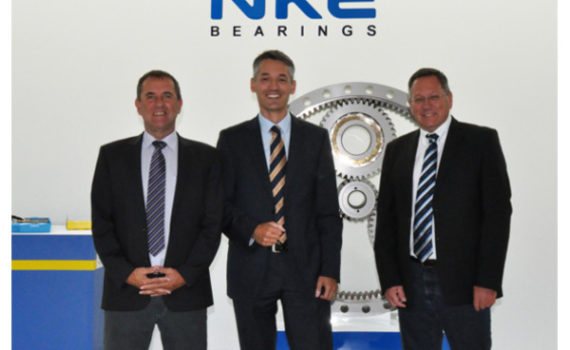 Steyr, Austria, October 2016. Bearing manufacturer NKE Austria GmbH is celebrating its 20th anniversary this year. Based in the Austrian city of Steyr, the company was founded in 1996 by Heimo Ebner and Harald Zerobin, both previously leading employees of former bearing manufacturer Steyr Wälzlager. NKE produces standard and special bearings for all industrial applications, with engineering, product development, production, final parts processing and assembly, quality assurance, logistics, sales and marketing being centralised at its Steyr headquarters. The bearings are distributed through 12 international representative offices and 240 distribution outlets in 60 countries.

In its first ten years, NKE experienced rapid, constant growth, with its turnover increasing on average by more than 20 percent a year. As early as 1996 its employees numbered about 80. To keep up with the growth, the company’s premises in Steyr-Gleink were expanded several times, but still proved too small. Consequently, new premises were completed in the Stadtgut Steyr business park in 2009. The new premises, in which NKE invested more than 15 million euros, had a building area of 10,000 m². As well as doubling the production capacity, the relocation facilitated a greater vertical integration and more efficient logistics. Despite the financial crisis, NKE increased in turnover in 2009 while its number of employees grew to 200. An important growth sector in this respect was wind energy, with China as the number one growth market. It was in the same year that NKE opened its first Chinese sales office in Shanghai. In the end, however, the global financial crisis did not pass NKE by without leaving its mark: today, staffing levels are down to 120. With the aim of uniting strengths and expertise and taking advantage of synergies, Spanish bearing manufacturer Fersa Bearings, which is specialised in the automotive sector, acquired an interest of 49 percent in NKE in 2016. The resulting group of companies boasts three production sites, five distribution centres, and three research and development locations.

After guiding the company for 20 years, its two founders and former General Managers Heimo Ebner and Harald Zerobin passed the company’s management on to Thomas Witzler in July 2016. With their many years’ expertise and experience they continue to be active in NKE, dealing with strategic planning within the company. “It is with pleasure and a little pride that we look back on the past two decades, in which we have succeeded, together with our staff, in establishing NKE as a manufacturer of premium bearings” says Harald Zerobin. “With the reorganisation we can now invest more time in strategic topics to shape and plan the next 20 years.” Regarding his future plans for the company, the new General Manager Thomas Witzler says: “Our aim is to continue our success story of the past 20 years. We will increase our focus on technical solutions, not least as a partner in the development of smart bearing solutions. Initial confirmed customer projects and feedback are already showing that we are on the right path. In addition, we have been able to bring ‘Advanced Engineering’ – the development engineering department for the entire group of companies – to our Steyr headquarters. In five years we want to make 20 percent of our sales with products that haven’t even been developed yet.”

About NKE Austria:
NKE Austria GmbH is a bearing manufacturer with headquarters in Steyr, Austria. The company was founded in 1996 by a group of senior staff members of former company Steyr Wälzlager. NKE offers both standard and special bearings for all industrial applications. Engineering, product development, production and final processing of components, assembly, quality assurance, logistics, and sales and marketing are centralised at its Steyr headquarters. The factory in Steyr is certified to ISO 9001:2008, ISO 14001:2004 and OHSAS 18001. NKE’s products are distributed through 12 international representative offices and more than 240 distribution outlets in over 60 countries.