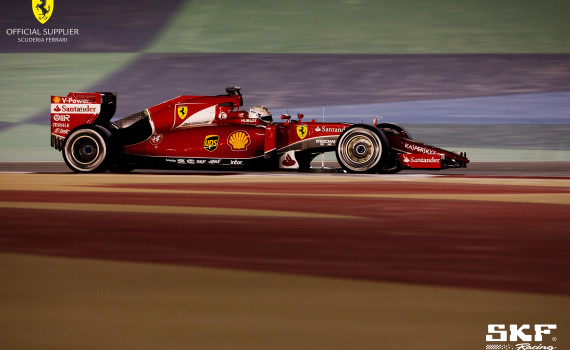 In Formula 1, super-fast data processing is absolutely essential. This applies not only for telemetry during the race, but also for the research lab where the power units for the racing cars are tested.

Gothenburg, Sweden, 15 February 2016: Thanks to a combined hardware and software solution from SKF, engineers at Scuderia Ferrari can now track the performance in the individual test chambers for power units in real time.

The solution is based on SKF’s modular IMx platform, which has been re-engineered to meet the specific demands of the Team. Including its SKF @ptitude Observer software, the platform provides condition monitoring, asset protection, preventive maintenance, and an increased speed of development.

The platform processes up to 100,000 observations per second. It can perform complex analyses and send the results to the telemetry system so that development engineers are able to check the status of the test object online. In view of the huge quantities of data, the calculation and transmission speeds of the system are extremely important: The SKF @ptitude Observer software collates the observations ten to twenty times per second to provide manageable results. “This helps the team to concentrate on results rather than data” emphasizes Mario Kuluridis, team leader for test facilities, mechanical and hydraulic development, in Scuderia Ferrari’s power unit testing department.

Scuderia Ferrari first started planning the modernisation of their test chambers in 2011. At that time not all test chambers were equipped with special systems for the continuous monitoring of the vibration behaviour of drive components.

“We actually had to go to each individual test chamber in order to see exactly what was going on inside. An online check of high frequency data in real time was simply impossible. This meant that troubleshooting was really slow. It also made it impossible to create forecasts for the service life of components based on trend values” recalls Kuluridis.

In the search for alternative monitoring systems, Kuluridis and his team ultimately turned to SKF. Although Scuderia Ferrari and SKF have worked together since 1947, this partnership previously focused on specialist racing bearings. However, the electronics experts on both sides found a common starting point: the IMx platform from SKF together with @ptitude Observer software.

The only snag? The standard version of the SKF IMx platform was actually developed for applications such as wind power plants. The condition monitoring in these applications requires far lower data quantities, far fewer channels and lower computer speeds than those required by Scuderia Ferrari for its high-performance test equipment. It was therefore time for the SKF engineers to tune up their IMx platform.

Scuderia Ferrari envisaged an integrated, wireless system, which was able to monitor individual elements of the test object during high frequency vibration tests. In order to adapt the IMx platform to the volume and speed of data flow that was involved, SKF designed an extended solution. This included additional hardware, which was to be integrated into the existing infrastructure. The experts had to ensure that the entire newly developed hardware package could be controlled using the same interface.

It was very important for the Scuderia Ferrari test engineers that measurements could be started or results displayed, for example, without constantly having to switch between a range of applications or devices. The team also wanted an extendable system with regular updates, up to 30 additional sensors and the option of carrying out routine calculations in short cycles.

“The fact that SKF is not only an official supplier, but also a genuine partner, guaranteed that the system was adapted successfully to meet our requirements” notes Kuluridis.

For the test engineers, the advantages are clear: The processes in the individual test chambers can now be observed wirelessly in real time. Furthermore, analysis methods and diagnostics developed specifically for the platform support the identification and removal of potential problems before they lead to costly downtimes.

So will this new testing technology also have a positive effect on race results for Scuderia Ferrari? We will have to wait until 20th March and the kick-off of the 67th Formula 1 season in Melbourne Australia to find out.