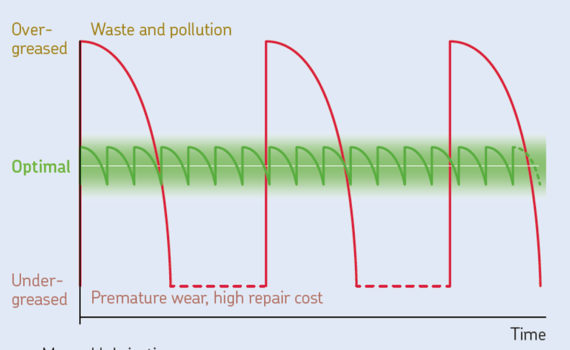 Proper lubrication is integral to ensuring the functionality of components and systems within heavy-duty machinery.

“If there’s a bushing, bearing or gear, something that is rotating or sliding in agricultural, construction and mining machines, it’s going to require lubrication,” says Peter Laucis, Director of Portfolio Management – ALS Products, SKF Lubrication Business Unit. “And the heavier the loads, the more aggressive and dirty the environment, the greater the need for lubrication.”

While manual lubrication is still the norm in many applications, use of automated lubrication systems (ALS) is becoming a more prevalent alternative to help minimise downtime, improve overall quality and safety through preventative maintenance.

In addition to helping increase safety and productivity for equipment owners, Laucis says OEMs can also benefit from integrating an ALS into their equipment. “It can extend warranty and performance, and it can maintain the unit running at various conditions under the design the machine was geared to do.”

The systems and how they work

An ALS consists of a reservoir containing grease or other designated lubricant and an electric, pneumatic or hydraulic pump which activates the system to deliver lubricant from the reservoir to the desired location within the machine. Depending on the design of the machine, lubricant can be dispensed to as many as 100 or 200 different points. A series of metering valves are used to apply the lubricant in the desired location at the exact time lubrication is needed.

The system knows where and when to apply lubricant due to built-in controls. If the ALS is integrated into a machine at the factory, the system can be controlled by the OEM’s programmable logic controller (PLC). The appropriate lubrication intervals are programmed into the PLC, enabling it to turn on the ALS when necessary.

SKF also designs controllers which can be built into the system if it is added to a piece of equipment at the aftermarket level or another point along the OEM channel, such as by a dealer. Laucis says these controllers can provide simple on/off control or be more sophisticated through the inclusion of sensing devices to provide operators with information about when lubrication cycles are occurring, fault indicators and performance attributes.

Single line parallel and progressive are the two main types of lubrication systems used within heavy-duty mobile applications. A single line parallel system consists of a reservoir and a pump connected to a bank of injectors by a single hose line. The injectors are lined up in parallel with one another, like fingers on comb, and each of the injectors function independently of one another. By doing so, each injector meters the exact amount of lubricant required and can also be adjusted independently if necessary.

The independent functionality is beneficial because if one bearing fails or gets blocked in some manner, it will not adversely affect lubrication of other bearings in the machine. “People like the single line parallel because they can lubricate the entire machine of, let’s say 120 points, and when a couple of those points fail, they’re still getting lubrication in the other systems,” says Laucis.

He notes these systems are often used in heavy mining equipment due to the need to minimize downtime as much as possible. It can also be used in construction equipment to avoid poor operator maintenance and in agricultural equipment for safety and bearing protection.

Progressive systems are similar, except the single line goes to a series of valve blocks instead of a parallel line of injectors. Each valve block meters lubricant to various points within a machine; one block may have up to 12 points to which it provides lubricant, and the next block or zone will lubricate another 12 points, and so on. “The main difference is if you have one bearing that blocks, it literally stops the entire system because the grease is progressing through the system in a series,” Laucis says. “If you block one bearing it will actually have a hydraulic lock on every piston in that block in the system, then the whole system shuts down.”

He says this type of system is typical for medium-size machines such as those used for highway construction because customers like that a fault indicator will come on when a blockage occurs, letting them know to check the machine at the end of the work day. While downtime is a concern, it is not as important as in mining operations where even the smallest amount of downtime can adversely affect productivity and thus profit for the customer.

Multiline systems can also be used in off-highway machinery. This system consists of a round housing with several points—up to 20—coming out of it, each of which goes to an individual bearing or other component to lubricate. The system is designed to simultaneously feed several points within a short distance. Laucis says this system is typically used in smaller, less heavy-duty applications due to the fact that it’s not necessarily the most cost-effective option. Since the system is limited on how many on points it can feed, a larger machine would require several systems to be installed, whereas the single line systems are more modular and better able to feed a larger number of points from a single source.

Use of an ALS is becoming more prevalent within the heavy equipment industry, however, Laucis says it can be difficult in some applications to compete with an individual who manually lubricates a machine. In large, heavy-duty machines—such as mining equipment—he says there is a high rate of adoption because much of the equipment is automated to maintain performance levels and eliminate or minimize downtime, which can be aided by an ALS.

He says safety is also a factor for increased use of these systems in heavy machinery. “People are becoming really safety conscious. They are preventing or minimizing the environments where there’s danger, and lubricating points on a machine is a safety issue.” Eliminating the need to manually lubricate parts of the machine ensures a person will not have to climb all over the machine—which may be covered in dirt and grease—and risk possible injury. “You also have mechanical shut off devices, automatic sensing for high/low level grease levels,” says Laucis. “All these accessories are now becoming more prevalent and required on automatic lube systems because they will promote safe environments, continuous uptime performance and be able to provide a nice clean machine.

“In the medium machinery market, where cost per point is becoming more critical, I would say the market is stabilizing and increasing based on the value of performance,” he continues. This is due in part to the ability to add telematics to the lubrication system, enabling customers to receive feedback on performance and servicing like they do with other systems in their machine. Increasing safety has also caused the rising use of automated lubrication systems in these machines.

On smaller sized machines, Laucis says manual lubrication is still the norm as end users typically have regularly scheduled maintenance they perform, making it easy to have lubrication be a part of that maintenance regimen. However, he does see the rate of adoption for ALS increasing in this segment, as well.

Whether the system is installed at the OEM or aftermarket level is also dependent on the type of machinery in which it will be used. On larger machines, the OEM tends to install the ALS at the factory. As machine size starts to decrease, the use of auto lube become options depending on the customer preferences and use of the machines in their environment. OEMs look to a strong aftermarket “pull” by their customers to standardize their ALS factory fit systems.

On the aftermarket side, he says it’s important to look at what value there is for the customer to add the system, such as safety and performance benefits. For a rental fleet, the case could be made for using the systems to help maintain inventory. If a rented machine comes back and is not performing as it should, the ALS’s data logger can verify whether or not the machine was properly lubricated to help narrow down what may be causing the issue. Laucis says having strong aftermarket support and proof of ROI on the end user side can lead to an OEM seeing value in integrating the system at the factory.

Since SKF also designs and manufactures bearings, the company is able to use its knowledge of how they work, and what causes them to fail, in order to explain the benefits of moving to an ALS. One of the most common performance issues with bearings is the lack of lubrication and they are dirty. “The best way to prolong the life of a bearing is to have a continuous, thin film of lubricant at all times,” says Laucis. “We have studies and other information to say if you continually lubricate with small intervals, you will have the longest performance of a bearing.”

An automated system is able to provide that continuous lubrication, whereas manual lubrication would require a person to stand by the machine while it’s running and move a grease gun to every point requiring lubrication, and apply grease every minute says Laucis. Often times manual lubrication is completed at the end of the work day or week, and the lubrication point is flooded with grease or the worker only applies a few pumps of grease and then goes about his or her business. This causes long intervals between lubricant applications, which he says is not the best way to prolong the life of a bearing.

“And that’s the philosophy of automated lubrication versus other methods that has to be sold and promoted to maintain machines on a longer level,” says Laucis. Through the use of an ALS, both OEMs and end users can benefit from the system applying only the amount of grease a bearing requires and at the exact time it’s needed, ensuring the bearing will perform as designed and machine downtime will be minimized.

The original article written by Sara Jensen/OEM Off-Highway can be found here: http://www.oemoffhighway.com/article/12250664/automatic-lubrication-systems-increase-machine-performance-and-reduce-downtime.