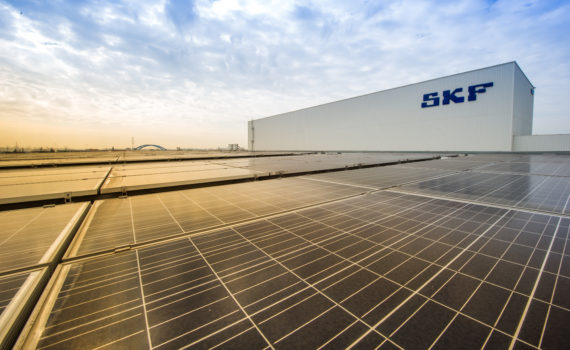 Now that the dust has settled on the COP21 meeting held in Paris in late 2015, it’s time to roll up our sleeves and plot a way forward, says Rob Jenkinson, Director of Corporate Sustainability at SKF, who shares his personal views on sustainability and the impact the COP21 will have on the industry

While politicians, diplomats and other high-ranking dignitaries have made promises and commitments, and agreed challenging targets, it is industry that will do the spadework by putting many of these commitments into practice – from improving energy efficiency to investing in low carbon technologies.

Industry will play a massive role in transforming our carbon-based world – that is wasteful with energy – into one that generates energy without any greenhouse gases, while using it much more efficiently.

It will require investment, and commitment, with innovation driving the growth of both new and established technologies. It will encompass everything from system changes – such as renewable energy sources and electric vehicles – to lower level operational improvements, such as more efficient pumps and motors, and better maintenance and reliability. As engineers, we love a challenge – so will be leading from the front on this.

This is not to belittle the contribution of government. The Paris meeting was an important milestone, in that so many nations reached an agreement to restrict future temperature rises to less than 2 degrees C. Now, with an agreement in place, these governments must enact sensible and challenging legislation – with appropriate incentives and penalties – that underpins the effort to reduce carbon emissions.

Legislation is a crucial driver for sustainability. The European automotive industry, for example, has slashed carbon emissions – mainly because tough legislation demands this. In similar ways, the stimulus of feed-in tariffs for solar or wind energy, and increasingly stringent emissions legislation were also vital in moving the sustainability agenda forward.

While the Paris meeting was an overall success, they didn’t get everything right: the agreements could have been legally binding and they could have done much more to put a global carbon pricing market in place.

I think that a globally connected set of carbon markets is an absolute necessity for the future – and is a distinct possibility. For now, we have isolated and poorly functioning carbon pricing schemes in different regions. Fixing them and hooking them together would help ensure that there is a level playing field for everybody and accelerate the rate of change An effective and sufficient global carbon price could make many things possible – including carbon capture and storage, which could avoid carbon emissions from combustion by storing  them  deep underground where it cannot contribute to climate change.

In reality, there is no single solution to the problem of climate change – so we need to work on many fronts at the same time.

Agreeing to a massive cut in emissions, as was achieved in Paris, may seem to be a nightmare for industry. It is actually an opportunity – tempered by risk – that will require a fundamental shift in thinking.

Look at the hard savings that can be gained from introducing energy efficiency measures; or at the top-line growth of companies that understand this – such as Tesla.

There are generally four types of company when it comes to climate change: those who do and say nothing – though, among larger companies, this is fast disappearing; those who say something but do very little – which might work as PR in the short-term, but ends up being more costly in the long run; those that are genuinely committed to carbon saving and energy efficiency – but restrict this to their own operations; and those for whom sustainability stretches beyond their own organisation.

At SKF, we try as hard as we can to be in this fourth category with BeyondZero as the strategic framework with which we drive and communicate all the various initiatives needed to do this. BeyondZero addresses both the opportunity to reduce carbon and cost related to our own operations and those of our suppliers, logistics etc. At the same time bringing more and more innovative solutions to our customers that help them (and society) do the same. For example, we work with our suppliers to drive improved energy efficiency, in an attempt to shrink not only the footprint of our direct operations but also up the value chain.

Within our own operations we have had a relentless focus on energy efficiency: between 2006 and 2014, we slashed total energy use by 16%, while growing our business by more than 34%. Yes, it’s part of our BeyondZero pledge to reduce our footprint – but it has saved us the equivalent of SEK200m each year. That’s a real example to dispel the myth that sustainability always goes hand in hand with higher costs.

Of course, the endgame is a full-scale transition away from fossil fuels – especially coal – and towards a ‘low carbon’ economy that sees low carbon and renewable energy sources gradually take over. It will take time – 20 or 30 years at least – but we need to start that journey now, and deliver the reductions needed in the short-to-medium term. We can do this by rapidly increasing the efficiency with which we use energy in industry and society – and there are already many ways to do this.

Variable speed drives can reduce the energy consumption of a motor by around 30%. Fifteen or 20 years ago, VSDs were seen as a luxury. Now, they are widely used and are delivering lower energy bills for large swathes of the manufacturing sector. Companies that have bought VSDs are saving on their electricity bills – and are prepared for ever-tightening legislation, as they are working ahead of the curve on sustainability.

Another example would be to switch standard ball bearings to the E2 (energy efficient) equivalents. The reason is simple: friction. E2 bearings have been redesigned to reduce friction while maintaining life and can cut bearing losses by 30%. Multiply this across the industry and you have lower electricity bills. When lots of apparently small actions like this combined  it can have a very large effect.

The manufacturing industry will be at the forefront of making and enabling these kinds of practical changes. If the transformation is to take place with sufficient scale and speed, industry must see a value to making these changes, and recognise the risk of standing still. If companies want to be part of the transformation – and profit from it, rather than suffer by it – they need to act now.